Suppose, for the sake of a better story, you chose to deliberately ignore “inconvenient” facts and details that “got in the way”?

In the case of the Beatles, that has happened repeatedly over the past fifty years.

With professional pride, we have always said: Not with us.

Beatles writing “by Harry Castleman and Walter J. Podrazik” has always been solidly anchored in facts. Beginning with our series of books in the mid-1970s, we’ve consistently verified accounts of the group members’ professional careers, to the best of our own U.S.-based abilities, back to the pre-Internet days. We’ve embraced the straight-laced and confirmed, rather than the fanciful.

We’re revealing it now because the time finally seems right. 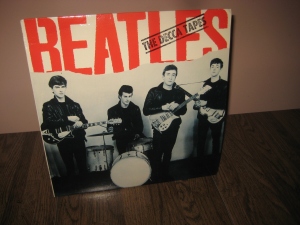 Back in 1979 we deliberately departed from “boring old facts” and instead indulged in the freedom of a fiction writer, weaving a tale the way it “should have” occurred, the way we might have wanted to see it occur.

It was the story of the Beatles and their recordings at the legendary January 1, 1962, audition session for Decca Records (a.k.a. “The Decca Tapes”). This was the audition they failed to pass. Decca turned them down.

More than a decade later, during the mid-1970s, songs from that session began to surface unofficially in the collecting world, cleverly packaged as a series of vinyl singles. These occasionally even turned up in mainstream record shops. In 1979, there were plans afoot to gather all the tracks onto an album, and word indirectly reached us of interest in liner notes for the package.

The request back then was straightforward: Explain the history and background of the Decca tracks. Since using a pseudonym was a given, the temptation was irresistible to be … more creative. To have FUN! Rather than turn out our usual straight scholarly job, we instead drew on the historical data to imagine an alternate history of early 1962: “The Untold Story of the Decca Tapes.”

In the liner notes we cooked up, all the key information behind each song was absolutely correct. We identified the original artists and composers for the many cover versions the Beatles performed that day. We provided background on the Lennon-McCartney compositions included. We offered critical analysis of their musical performances on each individual track.

Our central sleight-of-hand (in the spirit of the then-contemporary Rutles “documentary” “All You Need Is Cash”) was to change one single basic fact. Rather than reject the group, Decca signed them.

As a result, the recordings being discussed were changed from being on just one tape from a rejected audition. Instead, they were the product of multiple sessions for actual discs recorded for and released by Decca during the first eight months of 1962.

That conceit allowed for a straight-faced fiction that looked real enough for a casual reader to fall for, especially in the U.S. The reason “nobody” had these arcane U.K. records we blithely talked about? In this history, they flopped.

We embraced constructing the fabricated history as a challenge in manufactured credibility. The scenario timeline had to be believable, had to fit the inviolate well-known historical landmarks, and had to read as a confident, authoritative narrative. We cited real record release catalogue numbers, key touring dates, and their eventual EMI Parlophone launch in October 1962.

Faced with having to squeeze a lot of made-up events into the ten months between their audition and “Love Me Do,” we invented five Beatles singles for Decca, using actual catalogue numbers assigned to real, if obscure, Decca singles of the era. These were accompanied by a discussion of business strategies, along with a handful of made-up quotes and press mentions.

Most important, we asserted that just as the Beatles began their EMI career, there was a slap-dash album (with the ten cuts from the singles, and four “outtakes”) thrown together and issued by Decca just as the Beatles prepared to release “Love Me Do.”

Thus, “The Decca Tapes” 1979 album was positioned as a REISSUE of that UK-only album, which had been immediately withdrawn back in 1962 for legal reasons.  Conveniently, that explained why nobody had a copy from then. In a final nod to the original source of the tracks, we touted the 1979 “Decca Tapes” album as also containing a “previously unreleased” cut, identified as from the original January 1 audition … which, of course, it was!

The liner notes to “The Decca Tapes” were credited to “Grid Leek” (the “nom de radio” of a former college radio colleague). Not willing to totally present our made-up tale as gospel, we grudgingly explained it away in a single line at the end, stating that “The Untold Story of the Decca Tapes” was a work of “historical fiction.”

In overall design this package looked very professional, and the high quality of the content made it a favorite addition for many Beatles aficionados in 1979. Although some were fooled by the “Grid Leek” liner notes, most took them for what they were: a lighthearted homage from somebody who did really know his Beatles history, when that was not such a common trait as it is now.

With the fiftieth anniversary of the Beatles’ Ed Sullivan debut in the U.S., the history of the group has been revisited in detail. Even today, though, that narrative sometimes still suffers from the source bending the facts to suit the story. We thought this was a good time to come out from behind the curtain of anonymity and republish an old favorite nugget of ours that is so unlike anything else we’ve ever done.

Facts are facts, but in the right context, even the fabrications of a “What If” history can be illuminating. They definitely bring a smile. We still think our version of 1962 is more of a hoot than the truth.