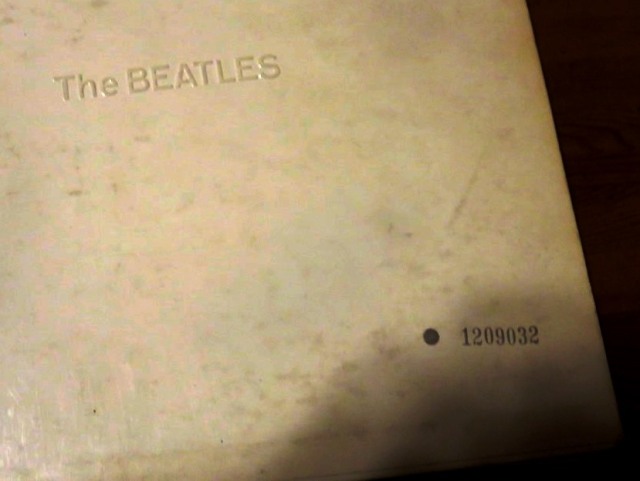 What should have been cut?

What should have remained?

What would have made this the perfect one-disc Beatles release?

Those questions have long accompanied evaluations of The Beatles a.k.a. The White Album, originally issued as a numbered, two-disc 12-inch vinyl set.

The implication has been that while there’s great music to be found, surely over 30 tracks, some of the more indulgent, “second tier” recordings should have been left aside.

Apart from passionate exchanges on just how indulgent “Revolution 9” really was, such discussions break down quickly because few could ever agree on which (if any) of the other 29 songs on the set would be “second tier.”

One answer is remarkably straightforward. Want a single disc? Disc 1, intact. It’s a strong well-paced collection, beginning with McCartney’s “Back in the U.S.S.R,” ending with Lennon’s “Julia,” and including Ringo’s songwriting debut “Don’t Pass Me By” and George’s powerful “While My Guitar Gently Weeps.”

As for disc 2, treat that, intact, as a companion release, much like the simultaneous issuing of a pair of Bruce Springsteen albums in 1992 (Human Touch and Lucky Town). Or treat it as a desirable bonus disc, as with U2’s The Best Of – collections in 1998 and 2002 which came in single and double disc versions.

Yet the desire to make this collection fit into the mold of a typical single disc album misses the point. This was The Beatles. Closing 1968. Coming off the mammoth success of “Hey Jude.” They could do whatever they wanted to do. Contemporary consumers at the time simply wanted more new Beatles music.

This package fit the bill. As the official follow-up to Sgt. Pepper (Magical Mystery Tour was not that album), the approach of this package represented as dramatic a shift imaginable from Sgt. Pepper.

Though the nickname The White Album instantly stuck, it somewhat obscured what the group had done. The Beatles had released an essentially untitled album (The Beatles by The Beatles) in a plain white wrapper, knowing that the REAL draw would be: Here’s a new collection by The Beatles. No distractions. No grand themes. No one really cares what it is called. It is just the latest from John Lennon, Paul McCartney, George Harrison, and Ringo Starr. 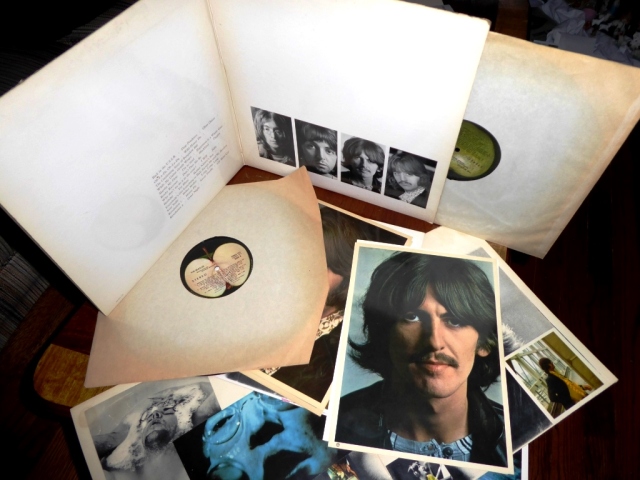 The concept of a “studio only album” that had been applied to Sgt. Pepper had seemed almost half an explanation for why they were not touring. It was said that the Sgt. Pepper recordings contained such elements as multi-track layers and variable speed effects that could not be easily be reproduced on stage. You could not play songs from this album live. (Though nobody told Jimi Hendrix, who did.)

The White Album took it to a much deeper level.

In contrast, the reason The White Album could not go on tour (so to speak) was that there was simply so much of it there. Rather than putting on a studio show about some imaginary band awash with special effects, The Beatles White Album crackled with the sense of confident exploration by its creators. There was a palpable sense that this could go anywhere.  Its stage was wide and deep.

The White Album needed four vinyl sides. With a shorter list of tracks, this collection might have been seen as falling into a rhythm of familiar repetition. Paul’s “Honey Pie” (like “When I’m 64” or “Your Mother Should Know”).  John’s “Happiness Is A Warm Gun” (more cacophonous poetry like “I Am The Walrus”). “Long Long Long” (like “Blue Jay Way”).  “Don’t Pass Me By” (more country riffs, like “Act Naturally” or “What Goes On”).

All those recognizable tropes were there, but there were also so many other songs as well, in so many other styles.  A familiar riff became one of many touchstones, a return visit that was part of a new musical exploration.

Apart from a pretty love song such as “I Will” there was faux blues (“Yer Blues”) and faux Beach Boys (“Back in the U.S.S.R”). Screaming simple lyrical riffs (“Why Don’t We Do It In The Road?”) and Lewis Carroll lyricism (“Cry Baby Cry”). Not one, but two McCartney evocative nature songs (“Blackbird” and “Mother Nature’s Son”).

Self-referential lyrics were not just to previous Beatles songs (as in “Glass Onion”) but to songs earlier on this album (“Ob-La-Di, Ob-La-Da” referenced in “Savoy Truffle”).  The Beatles recognized their own instant oeuvre additions.

The seven minutes of “Hey Jude” were missing on this set, but there was an even longer track in “Revolution 9.” Even the “Hey Jude” flip side title “Revolution 1” was close to but not quite the hit single.

The cumulative effect of all this was a deeper dive into the concept of a “studio only” album, well beyond Sgt. Pepper. The White Album was like being transported into the studio with the Beatles. Yes, upon close inspection it was clear the songs were fine-tuned and completely produced, but coming one after another after another, they felt like they were part of a very, very long Beatles studio session.

A carryover from Sgt. Pepper reinforced that. Record buyers had repeatedly played Pepper front to back, almost as one long performance. The White Album gently egged on that approach with audible transition ambience. Sometimes quiet background voices, sometimes an energetic shout (as in the kick-off to “While My Guitar Gently Weeps”).

In the U.S., FM alternative stations at the time of the original release did tracking from beginning to end, often into the wee hours of the night. That made side four a particularly apt way to end.

With the “Can You Take Me Back” riff (not a separately listed song) leading to “Revolution 9,” it seemed like 2 am and the studio party was still going on, reaching a level of profoundly indulgent but oh so confident one-up man ship.

The end of The White Album felt like an orchestral piece reaching a crescendo … only to be followed by a cool down. At the end of the entire album, the warm and reassuring voice of Ringo singing “Goodnight.”

After four vinyl sides, the impression was unmistakable. THAT had been a studio journey. Not in the self-conscious guise of a self-acclaimed Rock Opera. Rather, it was an emotional musical journey, conducted by maestros at the peak of their form in the ultimate studio experience. 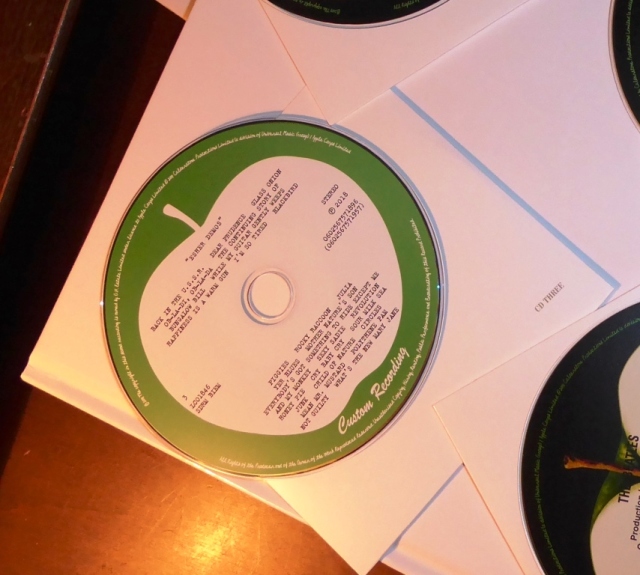 It is appropriate then that the expanded anniversary edition of The Beatles adds to and enhances that cumulative impression. The Esher demos show the material, in nascent form, beginning the musical journey.

The outtakes and additions are just what a fly-on-the-wall visitor would have loved to see, spying on the musicians. This is how the music got there. So much of it, crafted and created into a pop music experience that could be peeled apart, savored, and started all over again.

Imagine if there had been cameras capturing this truly amazing studio trip as it unfolded, from rough cut to finished product.

No, wait.  We’ve seen that movie, which began filming only a short time after this release.

The pure sound picture of The Beatles in The White Album was truly the better way to go.

With seven discs for this expanded reissue just about the right running total. 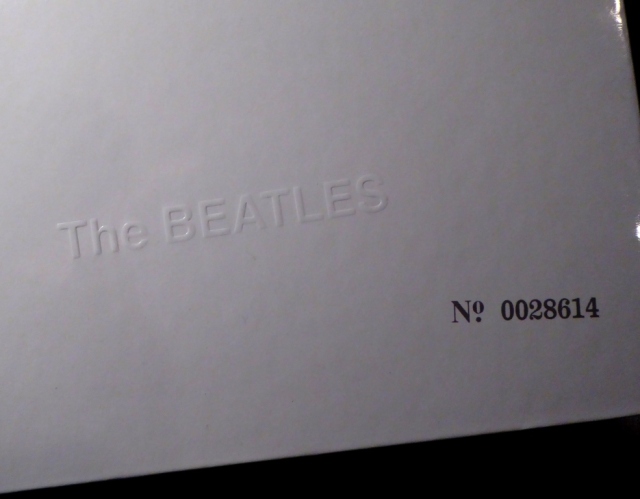 … another era, another numbered package, now for seven discs. Moving a million lower in the numbering sequence!

This entry was posted in Beatles, Uncategorized. Bookmark the permalink.