Adam West: The Batman Who Mattered

At least, for me.

As a young viewer and comic book fan, I saw the Adam West Batman series from episode one and was thrilled as one of my favorite heroes made the leap from the pulp pages to the TV screen.

But it did not take long to observe the mocking “camp” approach layered onto the program by the production team. Even as Batman beat the bad guys, “they” seemed to be laughing at the very idea of the caped crusader and comic book adventures in general. They telegraphed their attitude from the beginning when the first on-screen over-the-top “Pow!” graphics appeared. 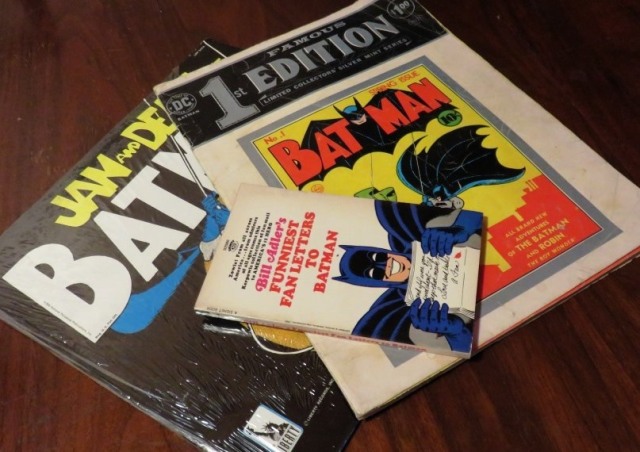 As Batman turned into an instant smash of the mid-1960s, it was within this guise. There were instant books and countless other cash-ins –even an album of songs “inspired by Batman” from one-time surfer singing stars Jan and Dean.

Yet through it all there was … the man under the TV cowl. 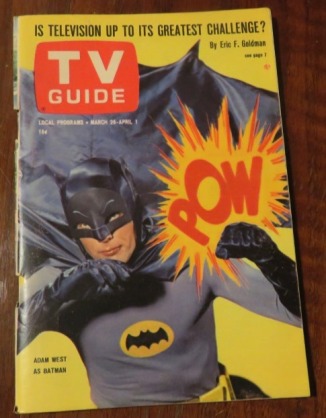 As cover featured on TV Guide.

Though taking it seriously on screen was supposedly part of the joke, in doing so West never broke character. He was not merely “in on the joke,” he was above it. He looked the part of the square-jawed costumed hero and his everyday secret identity and, no matter how absurd the situation, West projected an air of legitimacy that gave the flights of fancy credibility.

Years before Leslie Nielsen built a second career as a straight man to comedy adventures (Airplane!; The Naked Gun) West demonstrated the knowing discipline of inhabiting a fantasy world.  Displaying a sense of humor, but never mocking.

The Batman series never took on a dark and serious tone. That would be left to other interpretations of the character, especially under the umbrella of The Dark Knight (in comics and on film).

West would never escape that Batman character association for the rest of his career, so he embraced it. As did generations of fans, earning him a lifetime of affection that opened doors to other pop culture moments and assignments. His distinctive tones served him well in voice over work.

Most famously, Adam West took the continuing role of Mayor Adam West on Family Guy playing the eccentric and occasionally unhinged head of the town of Quahog.

In the 2016 release “The Return of the Caped Crusaders,” West returned to where it all began as he joined fellow Batman series alums Burt Ward (Robin) and Julie Newmar (Catwoman) voicing their famous roles. The full-length animated feature was done in a 1960s style, but with sly nods scattered throughout. For instance, an allusion to the wrap of Christopher Nolan’s Dark Knight film trilogy prompted the Robin comment “Holy unsatisfying ending.”

After a brief theatrical run, “The Return of the Caped Crusaders” hit the streaming and then the DVD/BluRay circuit. Discs are the best way to see it, allowing access to a bonus feature (“A Classic Cadre of Voices”) that shows West, Ward, and Newmar at the production microphones. 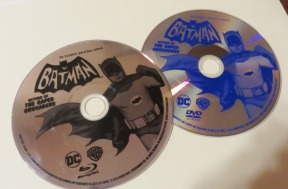 In tribute to Adam West, the Bat Signal over Los Angeles (Thursday June 15, 2017)